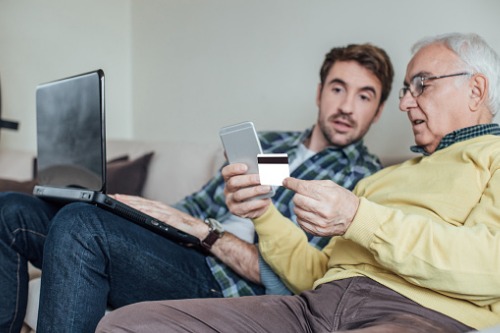 When making important life decisions, it’s only natural for people to seek advice from those they trust and can confide in. For children faced with a crucial life decision, that typically means turning to their parents — even if they may not be the most reliable authorities.

According to a new survey from COUNTRY Financial in the U.S., 61% of Americans regard parents as a key influence in shaping how they manage their finances. However, parents with children under the age of 21 cite a lack of confidence in a number of personal finance topics, with 46% giving themselves a grade of C or lower in terms of financial literacy.

Parents don’t feel ready as role models
The survey found that fewer than seven in 10 parents were confident when it comes to planning for retirement (61%) and taking out and paying off student loans (55%). They were least confident when it came to stock-market investing (33%).

But when asked to choose which resources they turn to the most in order to learn about managing finances, the majority of Americans selected parents (32%) over their partner or spouse (16%), internet sites and blogs (12%), a financial advisor (12%), or school classes (8%).

“Parents have the benefit of having real-life experience that has helped them to sharpen their personal finance skills, but most are not going to be experts in every topic,” said COUNTRY Financial Executive Vice President Tim Harris.

The missing piece — financial education
The survey attributed American’s dependence on parents for matters of money management, as well as parents’ lack of confidence on certain financial topics, to a lack of financial education in schools. When asked whether they received any education on financial matters in K-12 or college, 52% of parents and 52% of Americans overall said they did not; only 15% of Americans said they felt “very prepared” to manage their personal finances once they left college and stepped into adulthood.

Because they aren’t equipped with the right knowledge, parents appear to be holding back from discussing certain aspects of personal finance. Among the parents surveyed, just 13% said they had talked about retirement planning with their children, and 9% had had conversations about managing student loans, which are not as easy to put under the umbrella of “good debt” today as they were in previous generations. Most reported discussing saving (78%) and budgeting (52%), which an overwhelming majority (93%) said they were confident at.

The lack of family conversation about money matters, coupled with lack of education in school, is also affecting the confidence of millennials and members of Gen Z. Among survey respondents aged 18 to 34 years old, 48% said they felt somewhat or not at all prepared to manage their own finances upon entering adulthood. Even fewer felt certain about their ability to invest (20%), retirement planning (32%), or taking out and paying off student loans (43%), although a majority (80%) were comfortable managing a bank account.