“Two solitudes” might be a good way to describe Canada’s economy during the novel coronavirus pandemic.

While feelings of loneliness and isolation are common amid shutdowns and social distancing, there’s a growing divide between those who have emerged from the economic slump in fine — or even better — shape and those who have landed in a financial dark pit.

When it comes to jobs, debt and housing, Canada’s economic trajectory has split into two, data shows. It’s what economists refer to as a “K-shaped” recovery.

On the upper-arm of the K are higher earners, homeowners and older Canadians, as well as companies that can do business remotely or have capitalized on new pandemic-linked trends.

On the lower-arm of the K are hourly workers, who are more likely to hold jobs that require face-to-face interaction and be employed in the industries that have been hardest-hit by the lockdown, such as hospitality, retail and entertainment.

Young people, whose jobs are often first to be axed in a downturn, are also overrepresented in the bottom half of the K.

The latest example of the growing bifurcation was Canada’s September jobs report.

On one hand, job growth was much stronger than expected. The labour market added more than 378,000 positions, far more than the lukewarm forecast of around 150,000 many economists had anticipated. Most of the new jobs were in full-time work, with the data showing significant employment gains for women.

For both mother and fathers, September employment was “on par with pre-pandemic levels,” Statistics Canada noted.

But the report painted a starkly different picture in some corners of the labour market. The number of low-wage employees was down by more than 760,000 compared to September 2019. And employment for Canadian youth was still 10 per cent below February levels, the agency noted.

“This overwhelmingly hit hourly-paid workers,” says Mikal Skuterud, a labour economist at the University of Waterloo.

While high-wage earners had recovered all their work hours by the summer, work for those making less than $20 an hour is still 20 per cent below what it was pre-pandemic, according to Skuterud.

Recessions typically come with a reduction in consumer demand, Skuterud says. And as people buy less, the impact is usually heaviest on goods-producing industries and the construction.

But the economic shock triggered by the pandemic has mostly hurt one part of the supply side of the economy: the service sector.

“Normally, a recession will kill off good-paying jobs for men,” says Armine Yalnizyan, an economist and fellow at the Atkinson Foundation.

This time it has been low-paid service-sector workers — often women and racial minorities — who bore the brunt of the crisis, she adds.

Those under 35 make up the bulk of the 1.3 million Canadians who had been jobless for more than six months as of September, he says.

The surge in the number of people who’ve been out of work for that long is in itself concerns, according to Skuterud. Following the 2008 financial crisis, by comparison, it peaked around 900,000.

Read more: Patio heaters won’t cut it. What will it take for restaurants to survive winter?

But the trend is especially worrisome for Canada’s youth, he adds.

“When somebody is jobless for six months or more, it becomes increasingly difficult to get back to a job,” he says.

“I think there’s reason to be worried about this group of young people and [the] long term effects on [their] careers,” he says.

The divide in the labour market fortunes of Canadians is also producing two radically different trends when it comes to household debt.

On the one hand, those who have lost their jobs or seen their incomes decline are struggling.

On the other hand, those who are holed up at home working from laptops have preserved their paycheque and, often, seen their monthly expenses drop. With fewer opportunities to spend, these households have been paying off debt aggressively and beefing up their savings.

While two in five Canadians say they are worse off financially because of the pandemic, one in five say their money situation has improved, according to a recent survey conducted by the Angus Reid Group for BDO Canada, an assurance, accounting, tax, and advisory firm.

Those who say they’re saving more are likely to be university-educated and earn more than $100,000 a year, according to the report.

Meanwhile, two in five say they are seeing their debt pile up because of the pandemic, the survey shows.

Michael Braga, vice-president at BDO, says he’s never seen anything like the current split in his 19 years in the financial sector.

And that spread will likely widen as the pandemic drags on, he says.

So far, Ottawa’s emergency benefit programs and debt deferrals options offered by many lenders have helped keep struggling borrowers afloat, he says. Tellingly, the number of individuals filing for insolvency has been far lower over the past few months than it was last year.

But as banks start to demand payments, collections resume and the Canada Revenue Agency once again starts to go after outstanding tax liabilities, the trend will likely reverse, according to Braga.

“We’re waiting for the floodgates to open,” he says.

Buoying the fortunes of older and higher-earning Canadians is also the housing market.

Home sales volumes hit a monthly record for the third month in a row in September, according to the Canadian Real Estate Association. Sales were up 0.9 per cent from August in seasonally adjusted terms, which brought them to a gargantuan 45.6 per cent above levels seen the previous September, which gains spread across the country.

Pent-up demand from homebuyers who spent the spring in lockdown, pandemic-induced cravings for more space and less contact with strangers outside their social bubble, as well as low interest rates, explain the demand for housing and especially detached homes, economists say.

The MLS Home Price Index, which adjusts for the mix of home types sold, has risen by 10.3 per cent.

Read more: Thinking of selling your home? This could save you thousands

Rents, on the other, have been declining in many markets. The average rent for properties listed on Canadian rental site Rentals.ca, for example, was down 9.5 per cent in September year-over-year nationwide.

But while this has given some people a chance to upgrade their digs, it hasn’t translated into broad gains for renters, who tend to be lower-income in Canada, according to Yalnizyan.

Renters who stay put aren’t seeing their rent go down, she says. And those who’ve been struggling financially may not be able to catch up on missed rent payments, she adds.

“We don’t know whether we’re gonna be seeing a wave of evictions,” she says.

It’s hard to say how long the economy will hold its K-shaped pattern.

“The September report for the labour force surveys (is) probably as good as it’s going to get in the coming months,” Yalnizyan says.

On the other hand, public health authorities now have a much better understanding of the risks of the virus and how to handle it, Skuterud says. This could result in a better ability to keep schools and workplaces open, he says.

Still, if the economic recovery stalls, “there’s a possibility that more people will leave the upper arm of the K and just fall down the lower arm as the fall progresses,” she says.

And the majority of those would probably be women, who are both more likely to work in pandemic-sensitive jobs and more likely to have to stop or scale back working if schools and daycare shut down again, Yalnizyan says.

“We’ve got a real issue to watch as we move forward about women not only not being employed but not even looking for work, just pulling out of the labour market entirely,” she says. 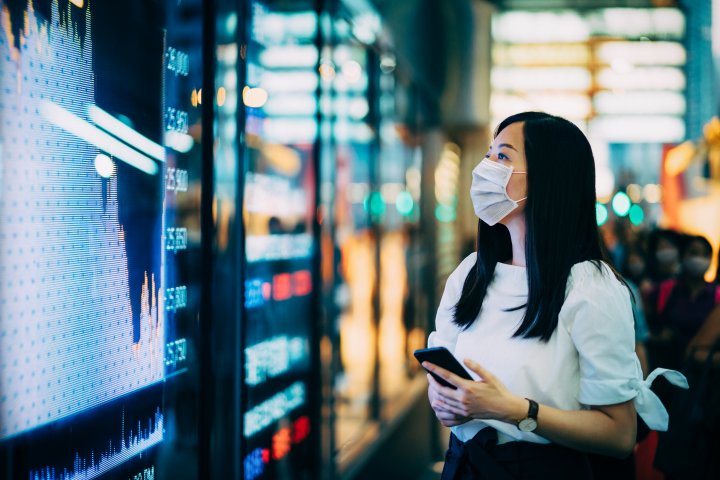